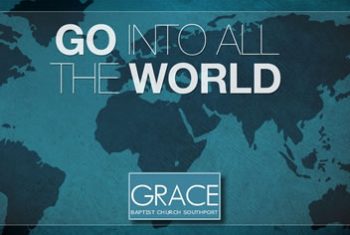 Grace actively supports mission work throughout the world, both directly through people we send, and also through our support of Grace Baptist Missions. Read more of our mission work and our regular updates.

Much More To Come

There was no mercy for the prophets of Baal, the cancer mercilessly cut out from the body politic in a day; nothing spared. But there was no going up to Carmel until that merciless work was fully completed. The principle is clear for us too see: sin must be dealt with before grace can rain down from above. With the evil removed the way was opened for blessing.

We remember the glorious truth that a crucified, resurrected and reigning Christ has sent the promised Holy Spirit to gather his elect from the four corners of the earth. Elijah´s servant looking toward the sea said “there is nothing”, but the three and a half year drought had to give way to an abundant outpouring. Praise God we can and must come before the Lord with the same confidence and assurance as Elijah, to persevere in prayer. Sin and evil has been atoned for and removed.

We may also look sometimes at the work and think “there is nothing” but faith perceives and perseveres until the promised blessing is poured out upon his people. Satan would also whisper to us “there is nothing”. But a cloud as small as a man´s hand is seen rising from the sea, and Elijah knew there was much more to come!

Can we say and pray with the same confidence, that there is so much more to come regarding God´s Kingdom?

A recent article in our local paper stated that sexual abuse towards children and teenagers had increased by 40% over the last year, and that violence towards women had also increased significantly. With us working predominantly among the poorer class of society the fractured nature of family life is also reflected in the church. However, the Gospel can reach those affected by such trauma. For example a lady who attended this years camp for the first time, with her husband and young child, recently asked to speak with Ronny and myself after the service, together with her husband. Well, a man who we thought was her husband! It had come to her knowledge that he was in fact still legally married to another woman!

There are many other sad issues that I cannot relate here, but suffice to say that we were confronted with something that is a common occurrence here, and as the worldly vernacular would say, “shacking up together” without any sense of commitment, especially from the male gender. I can think of 5 women who attend the church who are in relationships where they receive no support from their spouses. Also in other families the only word that would describe their homes would be ‘fractious’. One lady called Gladys, who attends the Sunday services in Villa Magisterial shared with Roxy that her partner had recently left her. She has two children and in desperate need of an operation to save the sight in one of her eyes. Another lady in VM called Angela, whose children attend the children´s club on a Friday, works all the hours she can to support her children. Her partner recently came out of prison due to the violence she suffered at his hands.

Of course of ourselves we cannot mend such brokenness nor can we change the circumstances of their bad choices and decisions, but we do know that real change can only come through the powerful work of the Holy Spirit through the new birth. Nothing but a new heart can bring about conclusive change, transforming people´s lives. Pray with us that the Lord will be gracious and bring about this miracle of grace, which alone can bring salvation, and transform many of these families.

We are encouraged by seeing new faces in all the areas where we are serving the Lord, but the great need is for a spiritual stirring among the unsaved.

Please pray for Davíd & his family. A month ago he left the church seemingly through conviction but has recently returned! He has even asked for baptism! Ronny knows the family and will be meeting with them on a regular basis. He is an engineer who works at a local mine, and would be the only sizeable “earner” among us. They helped recently with preparing the food for the anniversary service, which was a real encouragement.

Lucía is a lady who seems near to the kingdom. She was near death after an unsuccessful operation, but thankfully came through and has expressed her desire to serve the Lord. Her husband is a drinker, who spends more time with his worldly pals! Pray that these individuals will come right through to a full knowledge of God´s call to salvation in Christ. At Villa Magisterial we have a number who are regular on a Sunday. Recently a couple of the ladies have come with their husbands to the main service on a Sunday afternoon; Patti & René: Mari Luz & Owen. Pray for these couples and the others who attend, that the Lord will save married couples and that we may soon have a group of believers there to be a living witness in the community. Ronny leads a Bible study on Thursday, in the local community centre in San Pedro, with a number of members of the church who live in the village.

Pray also that the Lord will prosper all the ministry to the Glory of God. Pray for all the evangelism, and for the various children´s meetings in all these areas. How we need to see a new generation with biblical principles instilled in them, by the Spirit, from a young age.

Dust clouds, gales & rain! Never seen rain in June, and never seen gales in Peru! But have them we did, which made for a most unusual day! Roxy was in a panic, and all I could say was, “Call this a gale; you want to live in England!” I was a real calming influence! Then came a power cut; total darkness and me fumbling around to find the torch; now i´m worried about her blood pressure! I slept like a log through the whistling and sound of flying debris, while Roxy was up and down like a yo-yo (so she told me)! Flights were cancelled and Melly enjoyed a day off school!

We would value prayer for the visits to us over the next few months. Fiona Cary from the church in Formby, Merseyside, will be staying with us for a number of weeks. She will be helping Megan Addison in the orphanage and also assisting us in the children´s ministry, in all areas. Trevor Condy from our home church in Southport and David Rivero from the church in Madrid will, DV, be visiting us in September. Pray that their ministry to the church will be fruitful, and that they also may be blessed and encouraged by being with us.

I also need to travel to Lima a couple of times to change the category of my visa, due to the uncertainty regarding religious visas. Being married to a Peruvian I have the option of changing this status to that of a family resident. Pray that the whole process will go ahead without any problems. Pray that I will have a good dose of heavenly patience! I still find it hard to bear incompetence and irrationality in many of these matters. You can fulfill all the criteria that they ask for on the website, and then when you get there, they make others up! It often boils down to the individual person. Pray I may get a nice one!!

We take the opportunity to give thanks to the Lord for your support and prayers for us in the work here in Arequipa. May the Lord be pleased to extend his kingdom among us all to the glory of His name.

This site uses cookies tomake your browsing experience a bit faster and smoother. Is that ok? More info